The stone boat originated in the north-eastern states where it was used to clear fields of stones and stumps. It was once a standard farm implement and was sometimes known as a drag, skid, or sled. The stone boat is one of the handiest most versatile implements a teamster can have.   It is often more convenient than a wagon or cart for moving heavy or bulky items.  On top of that they can be very easy and inexpensive to make yourself!

A used car tire can serve the purpose by mounting an eye bolt through it and placing a couple of boards in place of the wheel.  I have been hauling stones out of one of our pastures with just such a tire lately.  The tires are free from a local garage and it makes a good training weight for a young team.  Used skidder or tractor tires can also be used.  They make a wonderful tool to exercise your animals on.  Just add whatever you wish for weight. 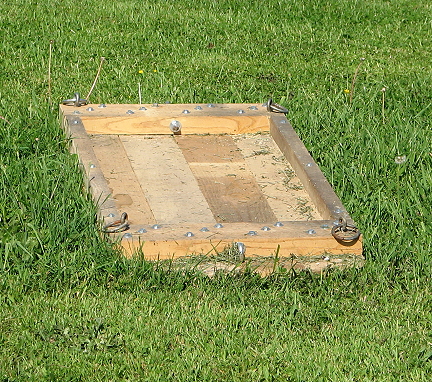 Recycling is great and all but a standard stone boat works better for a variety of chores.  You can make them a simple or as fancy as you wish.  They can be made entirely of wood or can be designed around a manufactured steel head.  They can be designed with replaceable runners or even a dump box or wheels to minimise friction.  I just made one for my calves from some scrap wood found around the farm.  Even some of the hardware was salvaged.  For a few hours of tinkering and less than $30 I have a handy piece of equipment.  Mine is made from Hickory and Oak 2″x6″.  I chamfered both ends and even the sides.  Chamfering the sides will make it turn easier but at the cost of having it  wander sideways when working on a side hill.  I put it together with lag screws, added side rails, a few tie rings and an eye bolt on each end to hitch to.  This style is nice because it can be hitched from either end equally as well.  I wasn’t too concerned about the size and just made do with the material I had.  It turned out around two feet wide by five feet long.  Personally, a good size is two to three feet wide and whatever length you want but it is handy if it fits in a truck bed.  I don’t see any advantage to having it any bigger and the bigger it is the less maneuverable it is.

I will make a separate post later about the wheeled stone boat but here are some ideas to get you thinking in the mean time.  Some of these are very interesting but I think the simple ones are more practical.

The stone boat below uses a scissor action to load large stones and stumps.